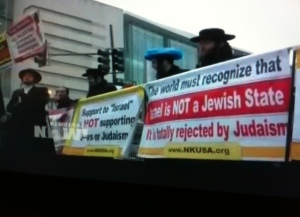 Orthodox Jews Protest Israel Policies and Its Characterization of a “Jewish” State.

On Sunday, March 2nd, 2014 a protest march took place in Washington, DC in support of the end of the international law violating occupation of Palestine by Israel and in support of boycotts, divestment, and sanctions against Israel for ignoring the ethical and legal imperative of the UN resolutions mandating its return to pre-1967 borders.

What is not commonly known though, is that these increasing protests which are now occurring in the US and Europe as well as in other nations, comprise as well those activists of the  Jewish faith opposed to the counter productive and unjust occupation,  and among them there are even Orthodox Jews who are anti-Zionist and who also condemn the notion that Israel is characterizable as a “Jewish” state, and who even condemn the existence of Israel without necessarily that implying a condemnation of Jews.

This is a most noteworthy reality which the mainstream media neglect to cover and our public school system fails to teach,  since it clearly debunks the myth often propagated by extremists that anti-Israeli occupation protestors are essentially gentiles at best, or at worse, somehow “anti-Semites”.   Quite to the contrary, some of the most illustrious and scholarly critics of Israel which in effect is the product of the nationalization of a religion – an anomalous phenomenon – are distinguished members of Jewish communities worldwide.

As Israel has become the only Apartheid state in the world, the time is running out for a peaceful and equitable solution to all concerned in Israel / Palestine, and Israel is now more isolated than ever.

Hence, it would seem that, given that the so-called “Two State Solution” has been eroded by the Israeli leadership encouraged and facilitated intense construction of illegal settlements, the only solution left is the “One State Solution”, i.e. a fusion of Israel and Palestine and an end to the theocratic dimension of Israel, so that what gradually emerges is a potentially vibrant secular constitutional democracy which must respect the right  of illegally expelled Palestinians to return.

The Hebrew Bible cannot be use as a lien on the real estate of the legitimate owners of Palestinian land,  and the concepts of a “chosen people” or of Israeli “exceptionalism” are unreal and not applicable to modern times.

Peaceful coexistence on the basis of an equitable sharing of rights and obligations by all involved is the only way forward, the only way a real Palestinian/Jewish Spring may evolve, a model which existed prior to the 1947-1948 war violent British Empire facilitated Partition which resulted in 65 years of extreme suffering and bloodshed .

Incidentally, another anomaly (inter alia) of the present Jewish state is that it has no civil marriage authority.   Even though some call Israel a “democracy”, it is up to the rabbinical council of Israel to determine who can marry who.