By now it seems that sadly indeed said teenagers have been assassinated.

This addendum however further buttresses what was expressed in said previous article, but adds the following facts.

According to the Palestinian Ministry of Information, since the year 2000 1,518 Palestinian children have been killed and 6,000 have been injured.  This translates into 1 child killed every 3 days.

By now, during the initial search for the killers of the Israeli teenagers, 360 Palestinians have been detained, and 11 killed, 3 of which were children.   At the same time house demolitions of families of “suspects” have been carried out.  So far there was given no proof that the democratically elected Hamas government in Gaza,  which is now united with the Fatah government in the West Bank, has been in any way involved with the assassinations of the three Israeli teenagers.

It must also be noted that while the three Israeli teenagers were in Israeli illegally occupied Palestinian territory, while the more than a thousand children killed by the Israeli government soldiers were in their own legal Palestinian land.

This is a kind of horrifically provocative and inflammatory behavior that is beyond the pale bizarre, brutal, and criminal for a so-called state government to undertake but tragically it is standard operating procedure for the Israeli power structure.   It is a behavior which is enabled by the United States’ policy of providing unconditional support for Israel, a policy which generates a continuous threat to our national security and which must be ended now.

No longer must we the people of the U.S. countenance this atrocious aggression in our name and with our tax funds.  Neither Israel nor Egypt are should receive any military or monetary support until their leaders become part of the solution in the Middle East.

The following is the loud and clear message to Israel from the prestigious Amnesty International human rights organization, a message which must be seconded by the US /EU/UN and most importantly, by the International Criminal Court. 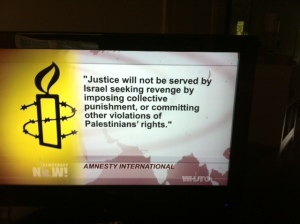 See infra, to facilitate access for reference purpose,  said previous article on this subject which was identified supra and which was published on  July 1st, 2014.

This has also been thus far an entire Israeli power structure narrative directed by PM Netanyahu whose honesty record is absolutely deplorable.

This narrative has thus far been devoid of any proofs but constantly the mantra is being repeated that “Hamas will pay”, i.e. collective punishment will be meted out – and already has – and innocent and unarmed civilians in the horrific Gaza concentration camp have already died and will further be sacrificed as result of this mindless scapegoating frenzy.

It goes without saying that if the teenagers have been indeed assassinated, it would be a horrific crime and those who have committed it, or have contributed to it happening, must be caught, tried, convicted, and sentences.

Most importantly though, there are three kinds of potential criminals in this case.

The first ones are  those who actually killed these teenagers, the second ones are those who provocatively and in violation of international law established a religion school on illegally occupied and therefore dangerous grounds of stolen Palestine land, and the third ones would be the parents of these boys who should have prevented their incursion into a such a dangerous area.

It is almost bizarre how obsessively PM Netanyahu is attempting to link this tragedy to the reconciliation between Hamas and Fatah, and thereby suggesting that there will be reprisals against everyone everywhere.    Just as bizarre was PM Netanyahu’s threat to Palestine after it was invited to join the United Nation Education and Scientific Organization (UNESCO).

We the people of the United States also bear some responsibility and so does the EU, the UN, and the International Criminal Court for not once for all forcing an end to the brutal occupations and illegal settlements being established relentlessly by the expansionism crazed extremist Zionist elements in the Israeli power structure.

Violence can only but generate counter violence in this case, and urging the likes of Netanyahu to use restraint is a charade since he has time and again proven that he is the quintessential embodiment of a peace negotiations wrecking machine.