The Venezuelan Crisis is Not Black and White : Scholars, Diplomacy and International Agencies Such as the UN Need To Be Involved but No Interventionism is Called For

Events in Venezuela are evolving to a potential critical mass level which calls for an end to the Trump / Pence / Mike Pompeo/Elliot Abrams/ John Bolton extremist right-wing gang’s shameless international violating interventionism and cynical ploys and threats coupled to the brazen Trojan Horse scheme of forcing drugs into the country while already waging an economic and financial set of blockades and freezes of Venezuelan oil income resources which damage further the suffering of the Venezuelan people.

Here is what Donald Trump said early in his disastrous for the United States and for others, about Venezuela : 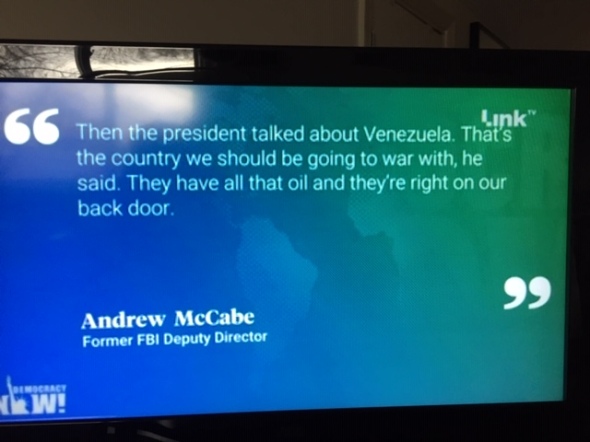 This is nothing but obscene and perverse exploitation opportunism camouflaged as “humanitarian relief” to be followed by insult being added to injury.

The most courageous component of cynicism and hypocrisy is the use of the Iran Contra architect Elliot Abrams in this sordid intervention,  who lied to Congress, and was indicted and sentenced but then pardoned by President George H.W. Bush on December 24, 1992.

The Venezuelan scholar Edgardo Lander who is a sociologist at the Central University of Venezuela and who is also works with Citizens Platform in Defense of the Constitution, was interviewed by the host of Democracy Now, as he presents balanced and objective of how vital it is for the United States to stop intervening in this crisis and start becoming part of the solution of the crisis, rather than attempting to continuing to criminally further exacerbate the situation to fast forward it into a conflict which may lead to the beginning of a civil war and an even wider conflict.

Lander is one of the leading progressive thinkers and writers in Venezuela and he calls for the involvement of UN Secretary Antonio Guterres and of Pope Francis along with the Mexican President Lopes Obrador in diplomacy and negotiations which is aimed at reaching a compromise needed to end this outrageous slow-moving coup by Mr. Guaido who has been trained and is scripted by the present Trump maladministration which is in total violation of international law as regards to the sovereignty of Venezuela and in regards to the its blockade of Venezuela with the object to get its people to topple its government.

These similar regime change interventionistic strategies and tactics were used by the U.S. for 59 years in Cuba and are being every day increasingly applied to Iran, for purely hegemonic objectives, but these and many others have not only abysmally failed, but have escalated in outright wars on the targeted countries and the result has been the waste of precious human lives and the monumental increase of our deficit to $22 trillion dollars which amounts to a debt of $ 66,000 dollars for every inhabitant, and obscenely, the enrichment of the moneyed elites and the corporations which form part of the industrial military establishment.

Only progressive democratic transparent governance by direct, voting will remediate this real emergency to prevent the otherwise spiraling out of control economic disaster which will inexorably follow.

It is a major scandal that the corporatized mainstream media will not bring interviews such as the infra one, to the awareness of the American public, thus violating the American public’s right to know, because the corporate sponsors force it to be so, and our Congress’s mostly neocon/neolib corrupted politicians go along with this charade which makes a mockery out of our so-called “democratic” values.

As a Sequel to the Previous Article on Venezuela, A Valiant Protest by One of the Founders of “Code Pink” »
« Scott Ritter in an Interview by Chris Hedges Exposes How Mike Pompeo Uses Manufactured Intel to Sell the American People a Potential War on Iran