The Now Impeached Trump/ Indicted Netanyahu “Peace” Plan Calamity as Evidenced by Its Insulting, Destructive, Dishonest, Dangerous, and Provocative Stipulations, it is DOA and Globally Rejected

It has now been clearly established what a threat the Trump/Netanyahu/ZionistPower Structure poses to the Middle East and global stability, national and international security, and hence to peace by justice via civilized diplomacy.
Bernie Sanders is the single candidate who has the background, wisdom, and historical awareness and determination to prevent the catastrophic consequences which the paths of neocons, neolibs, and racist supremacists, as well as the right-wing extremist exclusivist Zionist ideology, is taking us in their reckless, hegemonic, “exceptionalist” perpetuation of endless wars, endless support for the most depraved violently authoritarian regimes in the world.
The so-called Jared Kushner “peace” deal which was dictated to him by our impeached misleader Trump in conjunction with the indicted Zionist misleader of Israel’s Likud power structure, is an insult to Palestinians and all constitutional democracy aspiring and deserving peoples of the world.
Bernie Sanders understands how the toxic Zionist ideology cannot be conflated with Judaism, as the latter is a faith/religion which not hugely outnumbers but also distinguishes itself as day and night from the minority Jewish and Evangelist ideologues in that Judaism is based on the universalists values of the Torah which condemn the racist exclusivism of Zionism and its barbaric mistreatment of the Palestinians.
The American Council for Judaism and the prestigious website MONDOWEISS are a must to educate the American people about the horrific hyperbolic distortions which the Zionist narrative has fabricated in their attempts since the end of the 19th century to engage in destructive narratives via relentless cultural programing as relates to the reality of the Jewish history.  See inter alia “Zionism Has Distorted American Jewish Life” by Allan C. Brownfeld, and “ The Ethnic Cleansing of Palestine “ by the Jewish scholar Ilan Pappe who lived in Israel but decided to move to London for security reasons.
For national security and peace by justice reasons, inter alia, it has become truly an imperative that Bernie Sanders be elected so that America can become all it can be and therefore inspire by the power of example and not the example of destructive power.
Bernie Sanders is philosophically a humanist, politically a progressive social democrat type, as Europeans would consider him, and religiously his faith is Jewish. 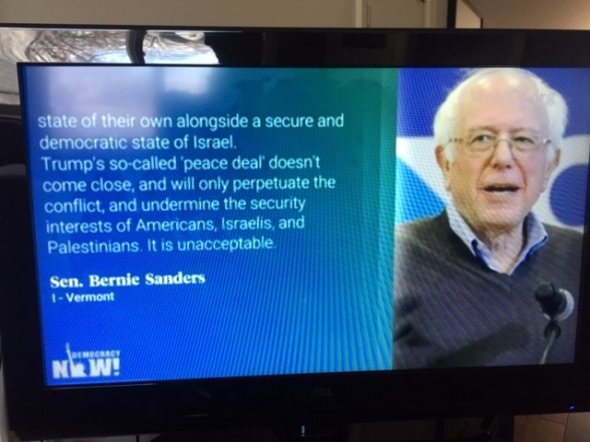 [APNFD Nr.117] Michael Moore Slams The Perfidious DNC Anti- Progressive and Anti-Genuine Democracy and Pro Its 1% Right Wing, for Attempting to Again to Sabotage the Nomination of Bernie Sanders »
« [APNFD Nr. 116] While the Impeached Trump Plans to Annex the Palestinian West Bank with Netanyahu in the White House, he is Officially Indicted.

One thought on “The Now Impeached Trump/ Indicted Netanyahu “Peace” Plan Calamity as Evidenced by Its Insulting, Destructive, Dishonest, Dangerous, and Provocative Stipulations, it is DOA and Globally Rejected”