Orthodox Jews with Palestine Flags Joined the Anti-Netanyahu Protest in Washington on March 3, 2015

This writer was present at the protest on the West Lawn of the Capitol Building on the day Netanyahu had the temerity to give a speech characterized by shamelessly specious and false arguments which he has been obsessed with constantly repeating as if that will render them credit worthy.

The occasion was probably a historic event for the negative reasons, namely that probably never has a foreign leader engaged in an intrusion with the collusion of the corrupt and extremist right-wing Republican leadership to speak to Congress in violation of protocol, with the intend to sabotage diplomatic talks being held by the President of the United States in conjunction with the leaders of Britain, France, Russia, China, and Germany, and in gross violation of the due respect to the President who did not authorize this invitation and who made it clear to Mr. Netanyahu was not welcome.

To boot, this misleader of Israel, displayed his worst mythomane behaviour, by further adding fuel to fire through incendiary and calumniating statements by his misuse and abuse of history and of such generic terms as “Nazi” and “Holocaust”as in relation to Iran, terms which are utterly inapplicable to reality and hence inoperable.

All of what is stated above is however by now widely known and amply supported by historic documentation.

The main point of this article is to provide photographic evidence of something that is not so widely known, namely that Netanyahu’s risible and false claim that he speaks for “all Jews”, is not even supported when it comes to his support by conservative orthodox Jews.

Point in case therefore, is the presence of contingents of orthodox Jews, representing thousands in the U.S. and internationally, who not only protested Netanyahu’s speech but furthermore do not support the ideology/concept whereby the state of Israel was synthesized in 1948 inside of Palestine, namely as a nationalization of the Jewish religion.

This group of very rational, principled, courageous, affable, and noble orthodox Jews were protesting the ideology of Zionist revisionism and characteristically they display the the red, black, green colors of the Palestine flag.  These are the Neturei Karta orthodox Jews whose existence is often ignored and/or denied by even liberal Jews and by a mainstream media, both of which seem engaged in a veritable conspiracy of silence when as regards to the existence of these dissenting Jews.

This denial of this reality, along with the revionists Zionist narrative denial of the genesis of who Israel came to be morphed from a religious faith to a state entity which was then violently implanted in Palestine phenomenon,  is as repulsive as is the denial phenomenon of the “Holocaust”, i.e. the genocide of Jews, as well as others, by the Nazis of Germany.

Due to inclement weather, the number of protesters was much lower than expected, but this writer, arriving on the scene a bit later than when the demonstration in front of the Congress building started, and took some pictures.

Shown infra therefore is a shot focused on the Neturei Karta representatives holding the flag of Palestine . 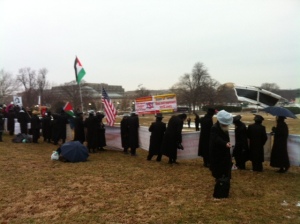 For the sake of clarity of the capture of the depicted documentation as regards to the presence of contingents of the Neturei Karta members, additional pictures are shown infra, and these were taken by this writer during previous demonstrations when the Netanyahu regime led the barbaric Gaza massacre of 2014 which resulted in the death of 500 children, some of them hiding inside UN schools, and altogether some 2,600 mostly unarmed peaceful civilians were killed.

These protest events took place in front of the White House and in front of the embassy of Israel, where this writer also spoke to these noble and affable Neturei Karta orthodox Jews and displayed infra are the some of these pictures attesting to this writer’s comments/ 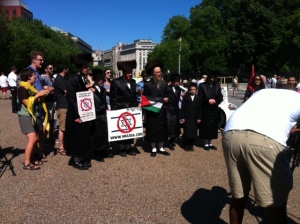 So, denying history cannot deny reality, it can only exacerbate the wounds of those who are truly the victims of barbaric acts.

Playing the role of impersonating innocent “victims” , while in reality being perpetrators only succeeds in postponing the day of reckoning at the International Criminal Court.

The United States must reassess and reform its dangerous, counter-productive, downright bizarre unconditional support of Israel and condition it to fundamentally (a) a withdrawal by Israel from the post -1967 war it occupies and annexes in defiance of international law and it acquired in said 1967 war which was provoked and started by Israel and not Egypt as declassified documents now clearly show, and (b) the dismantling of Israel’s as well as the only arsenal of nuclear WMD in the Middle East which was clandestinely acquired by a secret agreement with Israel PM Golda Meyer, and whose weaponization technology was secretly proliferated over the course of more than a decade to the white supremacist racist Apartheid regime of South Africa, with which Israel had a close relationship, of the kind it had with the dictatorship of the Shah of Iran, a dictatorship which was installed by a British – American intervention in 1953 which was instrumental in crushing the democratically elected government of Mossadegh whose socialist party Tudeh had harmoniously brought together seculars, Moslem, Christians, and Jews in Iran.

Now that once again, a unholly sinister alliance of American, mostly Republican, right-wing extremist neocons and right-wing extremists in Israel’s present power structure, coupled to right-wing extremist evangelists, are agitating for war on Iran, the absurdly ignorant and/or hypocritical rhetorical question asked by W. Bush, prior to the disastrous invasion of Iraq, namely “why do they hate us” must come to mind and must generate a resolve that can be summed up by the words Jews use as regards to the Nazi genocidal crimes against them, and many others, namely NEVER AGAIN !  War is Not the Answer if we as civilized humans aim to start going forward.

It is Israel and not Iran which must have draconian sanctions applied to it so that its people will finally vote out its war mongers and begin the path to peace which brings with it incalculable peace dividends for all genuinely concerned.

The GOP’s Shocking And Treasonous Iran Letter Has Achieved Critical Mass and a Seminal Moment Which Marks and Exposes the Degradation Ad Nauseum of The Republicans as a Party To Our American Democracy »
« A Chomsky Interview as a Follow Up to the AP Article “Netanyahu’s Outrageously Insolent Intrusion In Congress Comprises the Misuse of Anti-Semitism and The Exploitive Abuse of the Holocaust History.”

One thought on “ Orthodox Jews with Palestine Flags Joined the Anti-Netanyahu Protest in Washington on March 3, 2015”