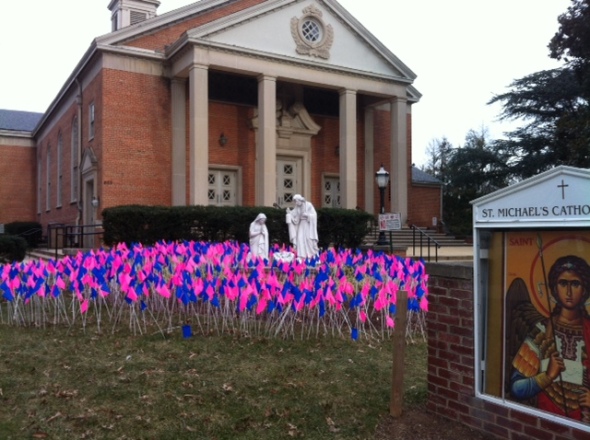 Hours after the previous article titled Catholic Churches Must Not Incitingly And Hyperbolically Conflate the Terms “Fertilized Ovum” with “Baby” was published on January 18, 2016,  the Saint Michael the Archangel Church of Silver Spring removed  a hyperbolically worded hate inciting sign which it had posted outside and in front of its building which read ” 3,000 Babies Were Killed by Abortion Today “.

The previous article with a foreword was brought to the attention of government officials as well as of NGO’s such as Americans United for Separation of State and Religion and Planned Parenthood.

The church is now back to doing what it does best peacefully and the peaceful community of Silver Spring is now back to walking by this church enjoying its scenic site without being jolted and stressed insultingly and inappropriately.

Community activism works and it does not have to be confrontational, just rational and polite.

No one’s freedom of speech is violated.

The Brazen Putrefaction of the Netanyahu Misleardership Calls for A Paradigm Shift of U.S. Policy Vis-a-Vis Israel Now That He Charged UN Secretary General as Encouraging Terrorism »
« Catholic Churches Must Not Incitingly And Hyperbolically Conflate the Terms “Fertilized Ovum” with “Baby”